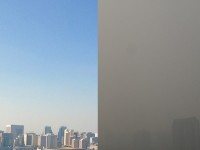 Day emulsion which has been specially formulated both for daily protection against harmful agents from outdoor pollution (suspended particles, fumes, chemical agents, running water, etc.) and for the prevention of related skin disorders, such as reactivity, congestion, fragility, instability, stress, lack of comfort or, ultimately, the acceleration of premature skin ageing.
Conceived as a global product, it is formulated with an emulsifying agent which is able to adapt to outside weather conditions and has specific detoxifying active ingredients. This forms an “intelligent” anti-pollution system which fits into the new generation of so called “smart cosmetics” to ensure that skin is protected and resistant to a hostile environment, especially in urban areas.

Application
Apply in the morning, as foundation, to a perfectly clean face, neck and neckline. Perform a gentle massage until it has been completely absorbed.

Indications
All skin types and in particular those who live in city centres or carry out outdoor activities.

Active ingredients
Anti-pollution agent: functional ingredient, protects skin through dual action: on one hand, it forms a barrier on the skin against environmental pollutant agents and, on the other hand, it reinforces antioxidant defences against damage caused by pollution, such as premature ageing and congested skin. It works thanks to its toxic-metal sequestering properties, thus preventing them from affecting the skin, and its ability to trap free radicals, which reduces oxidation phenomena linked to skin ageing. It thus behaves as a guarantor of cell viability and of improving skin morphology.
Rice bran oil: obtained from rice grains, it is rich in antioxidants, especially oryzanol and vitamins A and E, ferulic acid and linoleic, oleic and palmitic acids, making it a powerful ally which is particularly effective in the defence against the harmful action of free radicals and, consequently, in the fight against premature ageing.
Promotes collagen formation. It recreates an effective barrier between the skin and harmful environmental substances. It acts as a lubricant and emollient with a discreet smoothness and fast absorption, which allows you to make the most of all the cosmetic qualities of oils without the drawbacks.